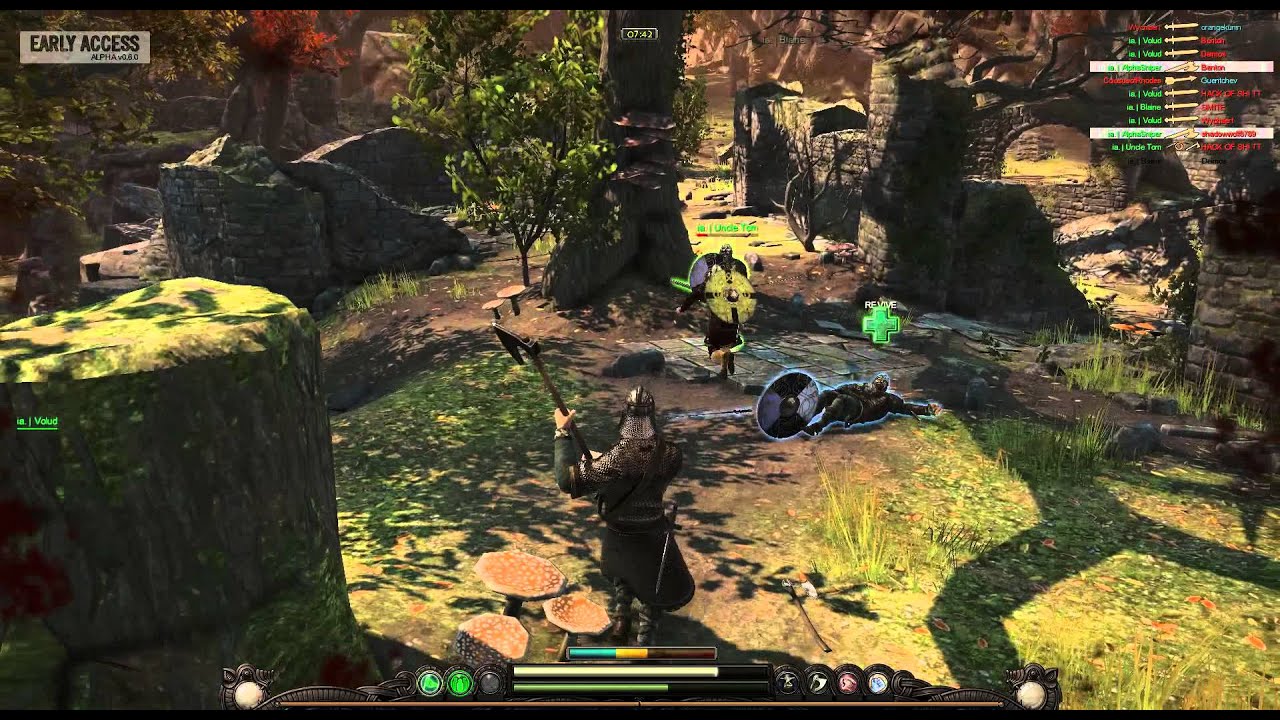 During the reign of the Vikings, Kainan, a man from a far-off world, crash lands on Earth, bringing with him an alien predator known as the Moorwen. Though both man and monster are seeking revenge for violence committed against them, Kainan leads the alliance to kill the Moorwen by fusing his advanced technology with the Viking's Iron Age weaponry. War of the Vikings delivers the next generation of Paradox’s close quarter combat focused brands that moves the setting to the Viking Age. All of these factors enabled us to create a game experience that has an increased intensity, improved accessibility, and more intuitive combat experiences ensuring you’re always presented with.

But will Floki actually go through with it? And why exactly did Rollo return? ET caught up with the show's creator, Michael Hirst, who broke down the shocking episode - and what it means for the rest of season five and beyond.ET: What was the inspiration behind this midseason finale and jumping between characters' points of view?Michael Hirst: Well, the jumping off point was probably me trying to think of a different way to do a battle, because we pride ourselves, I think, on doing battles differently, where we're always trying to do them in more interesting ways, but always actually centered on the characters.

So I was thinking about that, and it occurred to me that people must experience battles very differently, that no one's experience will be the same. Everyone's experience will be unique. It's a very intense moment, so it must be, you know, full of different emotions and fears and images and memories and things. HistoryWe also say goodbye to several characters. How did that factor into the episode?I knew that in this battle, quite a few major characters would die, and I thought that if I told that battle from about five or six different points of view, and if the first person whose point of view you shared actually died in the battle, every other time you started again with a new point of view, you'd kind of assume that they would die too.

But then they didn't die, so you would never know who was going to live and who was going to die, and that's the nature of battle. That was where it came from, and then the challenge was to get the director to buy into that. People in extreme settings, it must warp and distort time, so lots of things can happen in your head in a very short period of time. I was experimenting and thinking about different ways of doing something that we see all the time on shows. We see battles all the time, and they're nearly always shot in the same way, and I just wanted to break open those conventions.When I started writing the episode, I wasn't 100 percent sure of who would live and who would die.

So that was an extraordinary position to be in, having the state of all these characters in my hands, including a lot of them that I loved as characters very much. Astrid was one of them. Halfdan was another. But I thought there were some storylines that I'd almost said as much as I could say about these characters. Astrid was in this really difficult position.and that was forced upon my consciousness, like, Astrid has to die, and Harold has to kill his own brother.The death that seems to have the most impact, of course, is Astrid, and we see the effect it has on Lagertha at the end of the episode.

Lagertha has always been so strong throughout this series - how will this change her moving forward?Astrid forces Lagertha to kill her, and it's going to have an extremely profound effect on Lagertha. If you think back on Lagertha's history in the show, she's done, you know, a lot of things, terrible and beautiful. She's been through intense experiences, and she's been through battles. That stuff takes its toll, and part of what I wanted to do with the show was humanize Vikings, and say, 'Look, they're human beings.' Human beings can't be in those extreme situations forever without it having profound influences and effects on their psychology and their minds.

And because Lagertha is at the center of the show, I wanted to show that she too is certainly not immune of the effects of what she's doing, of the terrible things that happen. HistoryWe also saw Lagertha's new relationship with Bishop Heahmund (Jonathan Rhys Meyers). Was that always the plan, to intertwine them romantically?Bishop Heahmund is a real character. He was a real guy. He was a man of God, but he was a warrior.

So he came into the show because I needed a strong Saxon. But he's also a deeply sensual man, for which he punishes himself. So I thought, 'Who is a deeply sensual man going to be attracted to when he's introduced to Pagan society, to Viking society?' Well, Lagertha. Obviously the first time he met this famous shield maiden, he would be attracted to her, because he's a sensual man. So that was organic; I hadn't pre-planned that. It just occurred to me as I was writing the episodes, as I was embedding him into the show, that moment he set eyes on Lagertha, the moment he understood who she was, he would be attracted to her, with huge collateral damage on both sides, I must say.

But their coming together was inevitable.And Rollo returns at the end of the episode. What brings him back to Kattegat?Like any other fan, I was thrilled to see Rollo sailing into the show, but he's come back to deal with things which were never dealt with in the past. And we're going back to season one here, where there were huge questions about his relationship, and Ragnar's relationship with Lagertha, and what had actually happened between them all - and frankly, whose son Bjorn (Alexander Ludwig) was. So Rollo is sailing back to deal with things that have been on his mind for a long time, and it's pretty powerful stuff, I must say.Like Clive, who went off to do Taken, Gustaf has also nabbed another TV show with Westworld. We see Floki offer himself up as sacrifice in the midseason finale, so what does that mean for his character?Well, he ain't going anywhere anytime soon. The story of the Icelandic settlement may look on the surface like a slightly separate storyline, but in fact, it's a very important storyline for me, because I'm obsessed by the Viking gods and the Pagan gods, and you know, Floki is like the Pilgrim fathers, he's trying to set up a city on the hill, a place that's safe. And that storyline is only just developing.

I can assure everyone that the payoff of that storyline is quite extraordinary, but it's a way down the line.

War of the VikingsAnders De GeerDaniel PlattRobin HagblomRobert BergMikael HanssonMagnus LiljedahlRelease15 April 2014,Mode(s),War of the Vikings was an developed by and published. The game was announced at the Paradox Platypus Homecoming Event on 7 August 2013 in Sydney, Australia. It's a follow-up to.The announcement notice said that ' War of the Vikings is a new standalone entry into the War-franchise that will pull players into the brutal and bloody Viking Age, challenging them to design a personalized warrior and sack England as a mighty Norseman – or defend it as a brave Saxon. Built on the same -tech as War of the Roses, War of the Vikings delivers the next generation of Paradox's close quarter combat focused brands that moves the setting to the Viking Age.

All of these factors enabled us to create a game experience that has an increased intensity, improved accessibility, and more intuitive combat experiences ensuring you’re always presented with interesting choices.' War of the Vikings was released on 15 April 2014. On 2 October 2014 Paradox Interactive announced they would stop development of the game after 2 patches to increase stability and solve some major issues. On 28 February 2017 the servers were shut down and the game is not playable anymore. Saxons fight Vikings at the docks.‘’War of the Vikings’’ puts the player in control of a single soldier fighting for either the or the. The player will be able to define the game character profile by choosing everything from armour style, heraldry, shield paintings, beards, armour, weaponry and perks. War of the Vikings.