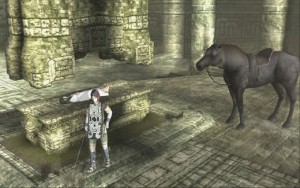 Back when I was at university, I tackled the subject of emotional attachment for my final-year dissertation. I asked the question: what makes players form a bond with the characters that inhabit the worlds of their games? In order to answer this, I first needed to determine which characters (NPCs, specifically) were successful at doing this in the first place.I threw the question to gaming communities across the web , and two names dominated the results: Ico's Yorda and Shadow's Agro. I'll avoid the specifics of the study, but - skirting around the actual crux of my thesis - you could boil the results down and say that Ico and Shadow of the Colossus are the two most emotionally engaging games of all time.Ten years down the line, with HD revisions of both titles on a single disc, this still holds true. Those that have played the pair before will know the characters well: Yorda is the helpless girl you take by the hand and lead through a bleak castle, and Agro is the trusty steed who ferries you about the misty peninsula inhabited by towering golems known collectively as the Colossi. Part of their success, I argued, is that they're intrinsic to the core mechanics of the game.

Dec 06, 2018  Share Tweet Share Share Email Comments In Sony Computer Entertainment’s exclusive adventure ICO, a young boy with horns is born in every generation to be traditionally sacrificed in order to cleanse the local community of evil spirits. This generation’s boy (and title character), however, tries to change his fate completely by fleeing from his would-be.

But it's more than this: Yorda and Agro succeed because of the context and setting surrounding them. This is what defines each experience, and is the reason they're widely regarded as two of the.Fumito Ueda and Team Ico are masters of pulling the player into the worlds they've created.

The tactics employed in doing this are simple: get rid of every non-diegetic device that reminds you that you're playing a game at all. There are subtitles for the rare snippets of conversation, but everything else you'd normally expect from has been banished.

Naughty monster story. Naughty Monster Story. Naughty Monster Story. Monsters from outer space have kidnapped the baby animals! Rescue baby animals and re-unite them with their parents. You'll have to swap, tap, and clear same-colored blocks in order to rescue your animal friends and send the monsters flying out of this world. Roar into action using your puzzle-solving skills and have a paw-some time!

There's no health bar, no resource meters, no score - no HUD at all, in fact - no collectibles that disappear when you run over them, and no loading screens. It's just you and the world behind the screen.Ico, tells the story of a young boy who is banished from his village due to the horns sprouting from his head. He's strapped to a horse by the leaders of his village, taken to an old castle tucked away in a sprawling forest, incarcerated in a small egg-shaped prison, and left for dead.

After rocking the little prison off its shelf, Ico manages to break free, and so his adventure begins. It's not long before he meets a pale young lady by the name of Yorda; a fragile little thing that is unable to speak the same language as our horned protagonist, unable to defend herself from the shadowy creatures that pursue her, and totally incapable of doing anything by herself.And therein lays the mechanic at the heart of the whole experience: getting Yorda safely from A to B, helping her to escape the prison that is her castle. This involves grabbing her by the hand with the R1 button (a tactic employed recently by Molyneux in Fable III), and ensuring she comes to no harm as you work your way out of the citadel. Whilst there's a reasonable amount of platforming involved in doing this - leaping across chasms and shimmying along ledges - it relies mostly on puzzles; working out how to traverse an environment and ensuring Yorda - who can't jump or swing from chains like Ico can - gets there safely, too.This was the first example of a device we've since seen in and, amongst others, an experience now known as 'partnership gaming'.

As Story of Seasons is the sort of game that leaves the speed and activities up to the player, I am not going to provide a day-by-day walkthrough. However I will provide an overview of. Story of seasons walkthrough.

Unlike the key NPCs in these games, however, Yorda has no abilities of her own. She can't even cross a room without being yanked from one side to the other.

She's entirely dependant on you, and this is precisely why you end up caring for her so much. You'll take great pride in swinging that makeshift sword, fending off the foul creatures that are trying to prevent her escaping. There's no special moves or combos to help you do this, you simply press a button to swing your sword, and if it hits the buggers enough times, they'll die. Combat in Shadow of the Colossus is an altogether different affair, mainly due to the fact that are no enemies - at least not in the traditional sense of the word.

The game is essentially 16 boss battles back-to-back, with little to separate them other than the horse ride through the desolate world they inhabit. Ueda's second emotional offering shares many aesthetic and atmospheric similarities with Ico, but the pair are vastly different. Whilst Ico relied on a vaguely familiar formula in terms of its design, Shadow of the Colossus presented an experience quite unlike anything that had come before it.Here, we follow a young man known as Wander, who journeys to a peninsular known as the Forbidden Lands. It's here that he believes he can resurrect his soul mate, Mono, who was sacrificed because of her 'cursed destiny'. Like Ico, little is revealed in terms of the character's background and motives, leaving the player to infer their own meanings.To bring back Mono, Wander is tasked with felling 16 Colossi; giants formed of rock, moss and earth, that stomp, swim and fly about the Forbidden Lands. Their destruction is no simple task, however.

Each presents a combination of platforming and puzzling, with several weak spots that need to be savaged with your sword in order to defeat. There's a very specific strategy required to down each Colossus, making one very different to the next. I won't go into any detail about the beasts themselves, as discovering what they are and working out how to bring them to their knees is all part of its appeal.Whilst critics gleefully throw around the term 'masterpiece' when describing Shadow of the Collosus, it wasn't without its problems. It was plagued with a crippling frame-rate, which dropped to the depths of despair during many scraps with the Colossi. With the HD re-release, BluePoint has successful purged this problem from the game, with no noticeable slowdown whatsoever. High definition visuals let the art style shine, allowing those now dependant on HD to appreciate the beauty of both worlds.If you've already skipped ahead to that all-important number hanging off the last paragraph of the review (and how very d are you), you might be surprised to learn that there are still problems. This stems from the fact that these are old titles now - Ico was developed over a decade ago, after all - and some of the mechanics are showing their age.

The camera, in the case of both games, is to blame here. Lining up for a jump can be more than a little frustrating, resulting in needless deaths or having to re-scale that Colossus you just spent 15 minutes climbing before falling off due to a misleading camera angle.

Whilst this might be mildly irritating at the time, you quickly begin to compensate for it, and soon forget about it entirely.It's all too easy to forgive and forget, here. It's all in the atmosphere, ultimately; the haunting landscapes you'll run, climb and canter through, the strange fictional languages the characters speak, the bonds you'll form along the way. So what if the camera can be a bit unwieldy at times? It's unlikely you'll care in the slightest after seeing each game through to its fantastic conclusion.This is one of the more important HD collections in recent memory; many people will have missed out on Ico and Shadow of the Colossus back when they were first released, and checking them out for the first time on a PlayStation 2 is a daunting prospect. I'm curious to see how the pair are received in 2011, especially by younger players.

There's no instant gratification to be had here; no head-shots, explosions or levelling up. Nor is there witty dialogue or a traditional narrative to cling onto. But invest in each world - in the castle and Yorda, and the Forbidden Lands and Agro - and you'll be rewarded with an experience that will stay with you for a very long time. For under £30, you'll be picking up two of the most important games ever made.