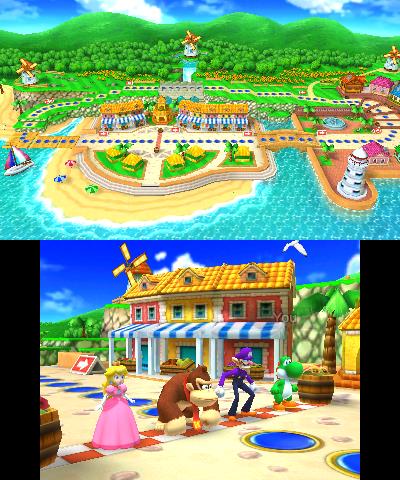 A thriving community of fans devoted to everything Nintendo.

A fine party goes a long way for everyone involved.

After a couple of extensive hands-on impressions with Mario Party Star Rush, I have seen most of what the game had to offer me. All that remained was playing it with friends, having a good time and mostly talk a lot of smack against one another. Within the several hours that I played, it became clear how the Nintendo 3DS really needed a game like this. The previous Mario Party on the 3D handheld barely left an impression on me and I felt mostly bummed while playing it. This title lifted that feeling and brought the wackiness of Nintendo based minigame parties in a new package for all to enjoy. We’ve covered Mario Party: Star Rush extensively in the past both after E3 and at Gamescom, but the biggest test for any Mario Party is how it plays with friends. If friends aren’t having fun and talking smack with each other, then it’s hard to keep going to the party. Thankfully, Star Rush is filling a need that its 3DS predecessor Island Tour fell well short of meeting, and finally gives the 3DS a quality minigame collection.

Toad Scramble, the game’s major selling point, has finally let NDCube experiment with the Mario Party formula yet maintain the series’s feel. The main elements of travelling around a board, battling bosses and winning minigames and stars remain, but the free movement it offers is such a refreshing change. Previous Mario Parties felt stagnant and constraining, whereas Toad Scramble allows for more experimentation. And if variety is a concern, there’s 15 different maps to play on. Although some thematic variety is missing since the whole mode is centered around navigating a grid, there are minor cosmetic elements that do a good job of fleshing out the maps. The other big change of simultaneous movement really helps speed things along, with full games taking roughly 15-30 minutes.

Toad Scramble does a good job of changing up other Mario Party elements as well, which helps makes games competitive but still tests of skill. Items not only help boost your progress, but items such as the Poison Mushroom can be saved to use as traps. The first samurai was black. Other Mario universe characters can be also be summoned as allies, who provide major benefits that are worth trapping the opponents for. The Ally characters even help out in the boss battles at the end of the map in addition to boosting the die rolls.

The minigames are also a big part of the Mario Party experience, and although there could be more variety in the minigames what games are there are a lot of fun. The bosses in particular are entertaining tests of reaction time, memory and even rhythm. The free-for-all minigames have more of a focus on skill this time, as well. A good example is how you have to throw paintbombs until a gigantic stamp and ensure that your color exceeds the rest. Another sees two trays of cookies and you constantly have to pick between them. The catch is to pick the one that gets chosen the least, which is a great to lead your friends on the wrong road. As examples, there’s a game that tests how fast the Mario characters can throw paint, and a game of misdirection involving trying to pick the least popular cooking tray.

Although Toad Scramble is the main event in Star Rush, Coinathlon ended up being my favorite part of the game. Coinathlon directly ties board movement to performance in the minigames, as the better the minigames are played the more coins and items your avatar can use to complete laps. My friends and I both got really into this mode as we spent a lot of time driving each other crazy in the games. More importantly, Coinathlon runs on its own unique set of minigames which made for a nice change from Toad Scramble.

If a traditional party is called for, there is an option for that in Balloon Bash. It takes place on a smaller board and runs for between 10 and 30 turns, where the objective is to catch coin and star balloons. Unlike the other modes, the key to victory in Balloon Bash is knowing when to avoid the opposition and when to take them head on. Although it’s fun for a bit, there’s only three boards to play on and they don’t really have any distinguishing features. As a result, the shorter 10-turn sprints were more than enough, that I didn’t really feel the need to run a 30-turn marathon.

There’s four other minor modes to party down with as well. Mario Shuffle has a couple of Mario figures moving down an obstacle course, using two dice in combination to get them to the goal. It’s fun, but with just a single course it’s not likely to be replayed. Boo’s Block Party is a basic but tricky puzzle game, with both an endless and versus mode. The Challenge Tower mode almost feels like Minesweeper at times as you climb a randomly-generated tower and try to avoid Amps that dog the way. The game does a good job of signalling danger, and I found the mode to be surprisingly addictive. The final mode, Rhythm Recital, is a quick rhythm game that uses classic Mario songs, but quickly gets old due to a lack of difficulty settings.

Mario Party: Star Rush is a strong package overall. It has a lot of smart ideas that will hopefully be used in future games, and there’s a good variety of modes to play with. Some of the modes are light on content but this is still the kind of game to have when you can trash-talk players in person – and there’s even a Nintendo 3DS eShop app that will let people who don’t dive in see for themselves. There’s some good single player modes, but to really see Star Rush’s full potential you’ll probably need to throw a party of your own.

Add to the discussion!
3DS